How to type notation using the Patantara editor

In this post, I present a fairly complex example of typing in notation using the Patantara Carnatic notation editor. I start from notation printed on paper and walk the reader through the thinking process required to be able to translate it for presentation on the web using Carnot.

The notation editor on Patantara is actually in Markdown format, which provides a way to format text in various ways, but I will here focus on only the notation part of it. To learn how to use Markdown along with Carnot, you will be able to read through any of the existing notation pages once you know how to use Carnot, so in this post I focus on Carnot. 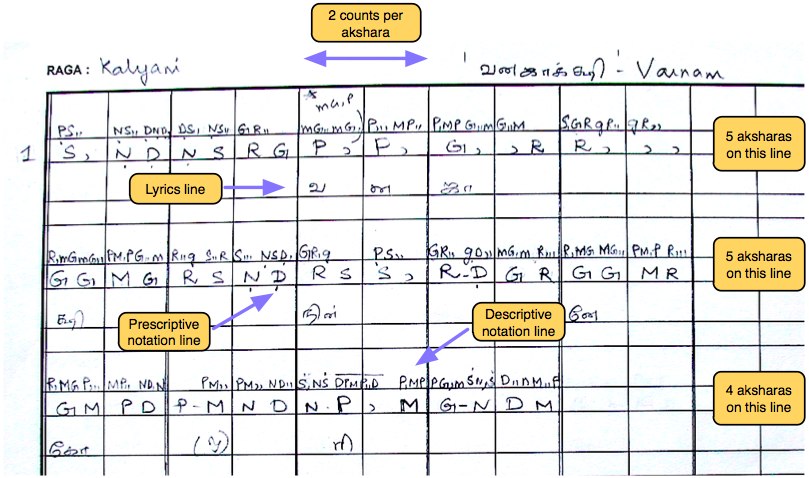 The structure of the “2-kalai khanda jaati ata taalam” in this composition is a cycle of 5+5+2+2 = 14 aksharas, with 2 counts per akshara. This is a fairly long cycle and therefore is broken up into multiple lines in the notation above.

The paper notation itself uses what is referred to as “svarasthana notation”, where the symbols “SrRgGmMPdDnN” are used for the 12 tonal positions within an octave.

Deciding on the “tala pattern”

The “tala pattern” property of a carnot notation decides the time structure of the melody, which in turn dictates how the melody will be laid out on the screen. So it is important to have this decided at first.

By giving spaces between every pair of commas, we’re telling Carnot to leave some extra gap for every two “aksharas” so that the division is visually obvious.

While at it, we’ll also pick a value for the number of aksharas we’re going to be placing on each line. If the tala was simpler, we would just choose the number of aksharas in one cycle of the tala so that all cycles align nicely on the screen. However, the cycle of 28 “aksharas” is rather long. So, just as in the original paper notation, we’ll split each avrtam into 10+10+8 “aksharas”, with the first two 10-akshara laghus appearing on a line by themselves and the last two 4-akshara dhrutams occuring on every third line.

Setting up the structure

Here is how the above will be rendered -

While the structure will not be obvious just yet in the visual form of the notation above, this is all it takes to create the structure and refine it. That was easy, wasn’t it?

Let’s take the above apart to illustrate some basic principles using which temporal structure is encoded in the notation shown.

The first line reads _ _ _ _ va na jaa _ _ _. This line consists of 10 “words” separated by spaces. These 10 words will each be shown in the time span of one “akshara”, the count of which was specified in the preceding line as aksharas = 10. The actual number of spaces between the “words” doesn’t matter and I’ve given a lot of gap just to illustrate. Only one space is necessary.

The _ (known as “underscore” or “underline”) character is special in that it won’t be displayed, but will still count as a “word”. This is useful to mark out the spaces between the syllables of the lyrics.

In the third lyrics line ko _ (o) _ _ri _ _ _, note that the _ri occurs together without any space in between. If you count the words on this line, this will match the declared number of aksharas (i.e. 8). However, the _ri is interpreted to consist of two parts _ and ri that are both expected to fit within the time interval of a single akshara. This means the ri will occur on the latter half of the akshara, as indicated in the paper notation.

Adding in the prescriptive notation

Let us now add in the prescriptive notation for the three lines, starting with the first line.

The degree of detail in the prescriptive notation on the paper is such that for every , in the tala pattern, we have two svaras. So the number of svaras we have to type on a single line to get the prescriptive notation is 20 svaras. Since we’ve told Carnot that the first line should contain 10 aksharas, if we simply give 20 svaras, Carnot will know to fit the 20 svaras into the time span of 10 aksharas.

In the above line, the 5 aksharas that make up the first laghu are beginning to show. We’ll tweak the look later on and for the moment accept what Carnot produces, because it doesn’t yet know about the level of detail in the descriptive notation.

Notice in the above line that the third and fourth svaras N- and D- have a hyphen following the letter. This hyphen indicates that the N and D are in the octave below the madhyasthayi. If we wanted to indicate the upper octave N and D, we would’ve placed a + sign like N+ and D+ instead.

When Carnot finds these octave indicators, it will correspondingly put a dot above or below the svara letter in the notation, as you can see in the displayed notation above.

So here is what all three lines look like with the lyrics and prescriptive notation.

Below is the displayed notation. As you can see, Carnot knows to follow the tala pattern from one line to the next.

Adding in the descriptive notation

The main principle to keep in mind is that a “word” in a svarasthana line may consist of one or more svarasthana symbols, including octave markers. So, for example P,MP would be one word consisting of three svarasthana symbols and one gap marker - the comma ,. Since together they make four sub-units, when P,MP is shown in the period of one “akshara”, the four sub-units would be placed at 1/4 of the space allocated for one “akshara”.

Below is the first line of descriptive notation for illustration. I’ll describe it first before presenting the entire line’s notation. I’ll leave a lot of gap between the words to show the separation more clearly, but only one space is necessary while typing. I’ve also aligned the corresponding times of the three lines for illustration. You need not align the the lines that you type. The alignment in the output will automatically be taken care of by Carnot.

Note: The “stretch”, “notation small font size” and such display controls will eventually be decided automatically, but they need to be set manually for now.

Lets complete the full notation for the first avrtam -

.. which will be rendered as shown below -